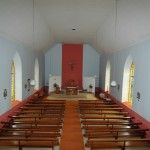 In Killeenagariffe are the ruins of a church in which Mass was said for the last time in 1648. From 1648 until 1758 Mass was said on the mass rock which today can be found at the Richardson farm at Ardvarna. A mass house was then built inside the ditch in the townland of Ahane.

Two fields make up the townland of Ahane and they are known as glebe land.

The mass house was a mud and wattle structure with a thatched roof and the priest had often to appeal to the faithful to bring scallops to repair the roof. It served the faithful until a new church was built nearby at Biddyford. It was commenced by Father Crotty PP in 1838, but became a victim of the night of The Big Wind in February 1839 when half the roof was blown away. The stone arching at the front entrance came from the ruins of Quin Abbey in Co. Clare. Three Ahane men went with horses and carts, stayed overnight and returned the next day with the makings of the arch. It was dedicated to Saint Patrick and many improvements and renovations have been carried out during the last 170 years.

Thomas Nevin of Mountshannon House donated the Stations of the Cross. These stations, carved from wood, were originally intended for a church in Germany. Nevin purchased them in New York in 1906 and donated them to the church in Ahane to remember his daughter who had died giving birth to a baby.

Ahane does not feature on any roadmap, but wherever hurling is spoken of – the very name Ahane will be always synonymous with great wielders of the camán.